Once in a Lifetime: A Project of Allison Maria Rodriguez

Once in a Lifetime: A Project of Allison Maria Rodriguez
(The 3rd of 4 in Layered Time series of solo exhibitions)

Gallery talk 7 to 7:30pm (Hybrid: Zoom & in-person)
A new video installation by celebrated Boston artist Allison Maria Rodriguez will be on view to the public beginning Wednesday, June 28 at the New SPOKE Gallery in South Boston. Entitled Once in a Lifetime, the exhibition is the latest in a series of solo shows called Layered Time, in which Boston artists working in a range of media explore themes of time and its passage. Kathleen Bitetti is Curator of the Layered Time series.
“We’re honored and delighted to present Allison’s work at our New SPOKE Gallery,” says Greg Liakos, Interim Executive Director. “It is provocative, immersive, and invites deep reflection on our relationship with our environment and with each other.”
Rodriguez’s new silent video installation has four large scale monitors and she has painted the gallery wall gray. The genesis of this work, and the video footage for it, comes directly from Rodriguez volunteering in Costa Rica to support researchers who are working to ensure the survival of leatherback sea turtles and their hatchlings, Bitetti writes in her curatorial essay for the show. Many of the remaining Pacific sea turtles nest in the sands of Playa Grande, Playa Ventanas, and Playa Langosta on the Pacific coast of Costa Rica.(1)
During Rodriguez’s time volunteering in Costa Rica, a juvenile blue whale became stranded on the Playa Cabuyal beach. The blue whale, like leatherback sea turtles, is an endangered species. The blue whales’ endangerment is a direct result of humans nearly hunting the species into extinction. Rodriguez chose to paint the gallery wall a color called anchor gray, underscoring humanity’s direct role in endangering blue whales.
Three of the monitors are dedicated to the artist’s blue whale footage, while the fourth monitor is devoted to her footage of sea turtle hatchlings. The work, according to Rodriguez is, “both a memorial to and a witnessing of this particular whale, as well as a summoning within the viewer of a sense of the presence of interconnection. . . Multiple biologists stated that to see a blue whale this close is a ‘once in a lifetime’ opportunity. The title of this project comes from the tension I experience in this phrase.”
Allison Maria Rodriguez is a first-generation Cuban-American interdisciplinary artist working predominantly in video installation and new media. She creates immersive experiential spaces that challenge conventional ways of knowing and understanding the world. Her work focuses extensively on climate change, species extinction and the interconnectivity of existence.
Through video, performance, digital animation, photography, drawing, collage and installation, Rodriguez merges and blends mediums to create new pictorial spaces for aesthetic, emotional and conceptual exploration. She uses art to communicate beyond language – to open up a space of possibility for the viewer to encounter alternative ways of connecting to the emotional realities of others. Rodriguez’s work has been exhibited internationally, throughout the country and extensively in the New England area, in both traditional and non-traditional art spaces. Her work is also on view in the recently opened exhibition, A Thread, Extended, at Northeastern University’s Gallery 360.
A 2021 finalist for Mass Cultural Council’s prestigious Artist Fellowships, Rodriguez is a 2019 recipient of SPOKE’s (then Medicine Wheel’s) Activist Artist Award.  She is also working alongside fellow Boston artist Franklin Marval on a SPOKE-led creative placemaking initiative in S. Boston’s Old Colony neighborhood. Funded by Beacon Communities and Boston Housing Authority, the project will engage residents and key institutional partners in Old Colony to create art that improves the quality of life in this neighborhood as it undergoes a complex, decade-long redevelopment. The arts will give voice to residents and community partners as they navigate the creation and growth of this neighborhood.
(1)  Quote from Earth Watch’s website for its program for volunteers. https://earthwatch.org/expeditions/costa-rican-sea-turtles
Read more about Allison Maria Rodriguez’s exhibition here: Allison Maria Rodriguez show essay, Kathleen Bitetti
Register for the event on Zoom here.

Layered Time is a series of four solo exhibitions connected thematically by visual artists who explore facets of time through painting, drawing, video, and multimedia. The three additional artists exhibiting in this series are David Lloyd Brown, Naoe Suzuki, and Shea Justice. 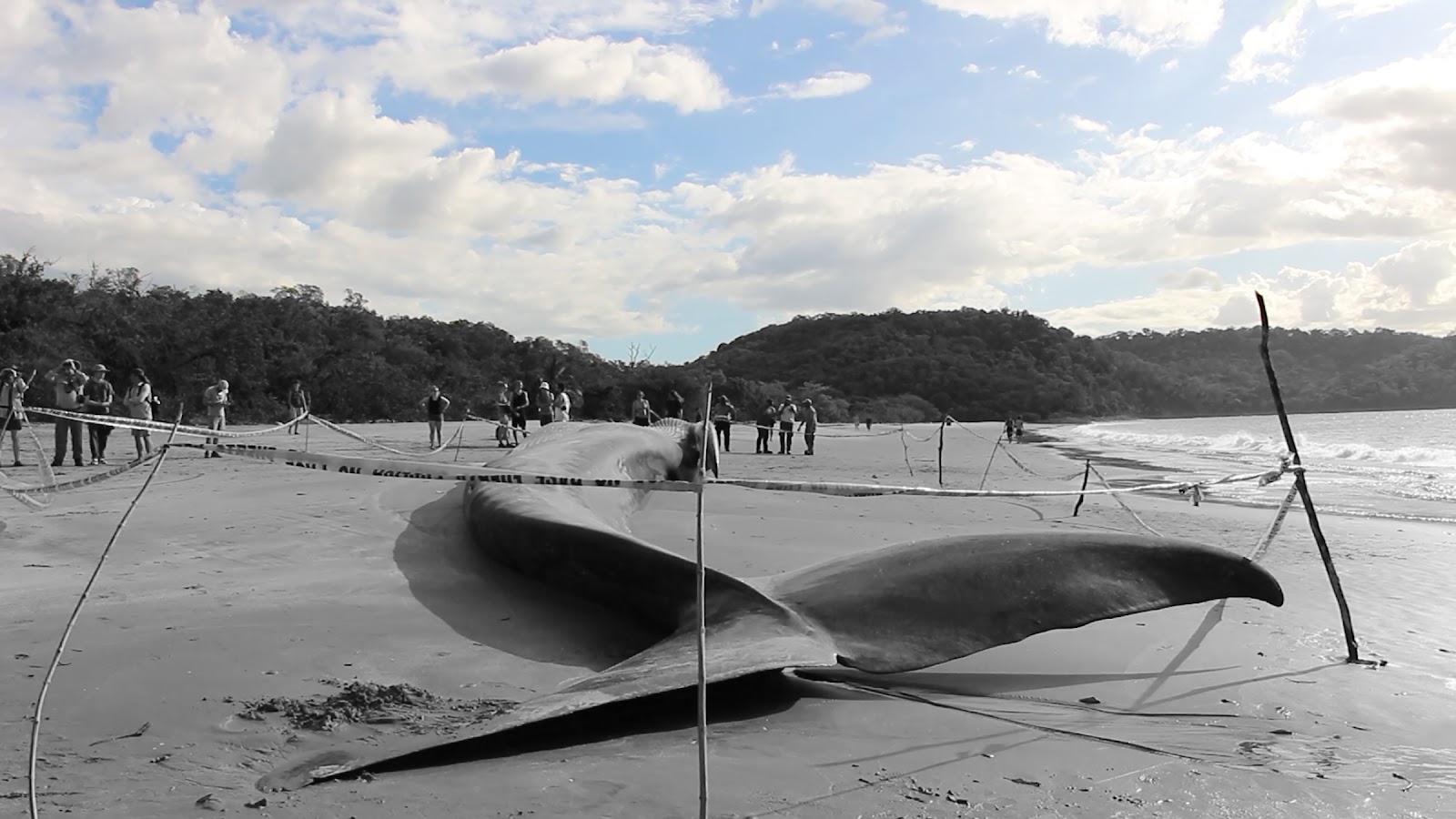 Info about the image: Image courtesy of the artist and is a video still from the project: Once in a Lifetime, video installation 2021

This timely discussion with Allison Maria Rodriguez, Franklin Marval, and Carolina Aragón, will explore how and why these artists have put climate change at the center of their work here in Boston and beyond. Donna Brown, Executive Director of South Boston Neighborhood Development Corporation & SPOKE Board member, will moderate the panel.

This WeSPOKE Gallery talk is presented alongside “Once in a Lifetime,” Allison Maria Rodriguez’s show at New SPOKE Gallery, and “New Art in Old Colony,” our creative placemaking initiative in South Boston’s Old Colony neighborhood. It also coincides with ”FutureSHORELINE,” Aragón’s temporary art installation that illustrates projected flooding in Boston due to sea level rise.

SPOKE and its South Boston partners invite you to be part of New Art in Old Colony, an initiative to create public art for the Old Colony neighborhood as part of its next phase of redevelopment.

SPOKE commissioned Boston artists Allison Maria Rodriguez and Franklin Marval to lead a series of workshops with Old Colony residents at the Tierney Learning Center to explore how works of public art can best reflect their vision, ideas, concerns, and hopes for the neighborhood.

SPOKE is a nonprofit organization that works to activate art to heal, transform community, and drive social progress. The organization (formerly Medicine Wheel) will make its future home in Old Colony by converting the former Boston Housing Authority headquarters building into a public arts center and the hub of a cultural campus that will serve residents of Old Colony and visitors from across Greater Boston.

We are grateful to co-host New Art in Old Colony with South Boston En Accion, Tierney Learning Center, and the Old Colony Task Force. This project is possible through the generous support of the BHA, Beacon Communities, and the National Endowment for the Arts.

New video installation “Once in a Lifetime” by celebrated Boston artist Allison Maria Rodriguez will be on view to the public beginning Wednesday, June 28 at the new Spoke Gallery in South Boston. The gallery opening and reception will take place on Wednesday, July 14th in a hybrid format, both in person and via Zoom. Register for the Zoom reception and gallery talk here.

Entitled Once in a Lifetime, the exhibition is the latest in a series of solo shows called Layered Time, in which Boston artists working in a range of media explore themes of time and its passage. Kathleen Bitetti is Curator of the Layered Time series.

“Facing Recovery, Facing Hope” showcases mosaic self-portraits created by young people in residence at Gavin’s Cushing House. These moving, personal works are testaments to art’s power to heal and deepen our understanding of ourselves and our place in the world. Each mosaic is embedded with a QR code that, when scanned, queues recorded video stories in which the young artists explore themes of identity, addiction, trauma, recovery, family, and community.

“These mosaics evoke the metaphor of piecing our lives together, which these brave young people are doing, often in the face of difficult circumstances,” says Greg Liakos, Interim Executive Director. “They are calling us to compassion and understanding through the power of creative expression.”

Cushing House youth worked closely with MW Productions/SPOKE teaching artists Richie Dinsmore and Amanda Shea, and Artistic Director Michael Dowling, to create these mosaic self-portraits, along with workshops writing poems and spoken word performance. “MW/Spoke is more than just a recreational activity.  There is a real therapeutic value that teaches and encourages our residents to express themselves in healthy ways that enriches their lives.”  Said John McGahan, President Gavin Foundation

The Gavin Foundation operates two long-term addiction recovery homes for transitional age youth, one for males and one for females, with sixteen young men and fourteen young women between the ages of 16 and 21. MW Productions/SPOKE has partnered with the Gavin Foundation to activate the power of art to help young people recover from addiction and alcoholism for nearly twenty years. Youth who have experienced addiction come to our art studio four hours a week in the first six weeks of their recovery to work with teaching artists. The partnership is part of a larger MW/SPOKE Hope & Recovery program. In January an earlier group of Cushing House youth exhibited works in a show entitled “Heroes & Villains, at Boston’s Galatea Fine Art Gallery.

“Facing Recovery, Facing Hope: Mosaic Self-Portraits from the Cushing House” will be showcased virtually as a part of MW Productions/SPOKE’s annual Turning the Wheel fundraising event on Wednesday, June 16th from 6-7 pm via Zoom. The gallery will be toured virtually for attendees before and after the event. Appointments to visit the SPOKE Gallery can also be made by appointment by emailing Info@mwproductions.org.